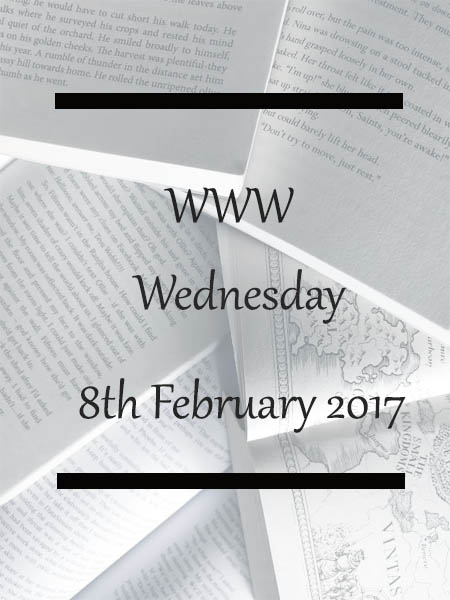 This meme is hosted by Sam over at Taking on a World of Words. A similar meme, This Week in Books is hosted by Lipsyy Lost and Found.

Why not join in? Just answer the following three questions in a post and then put a link to that post in the comments over at Taking on a World of Words.

This meme will be categorised together with my book reviews. All links will get you to the book’s Goodreads listing, as always 🙂

I’m very nearly done with this now and should finish it on Thursday. It’s the only ARC I’ve got at the moment so I’ll be able to return to my tbr pile after this!

I’ve really enjoyed it, and should get my review written early next week. Since I only post one review a week here it’ll be a while before it’ll go live but it’ll be on Goodreads right away 🙂

Ashael is a hunter-gatherer woman, apprenticed to Bhearra, the healer and spiritual leader of their tribe.

The Zanthar are invaders from another world who extend their own lives by stealing the life-force of everything around them. They were last seen on KalaDene 200 years ago. They have returned, looking for The Vessel, a being prophesied to hold the life-force of the land.

Iwan is a slave to the Zanthar, descendant of the folk that were taken as slaves the last time the Zanthar visited this world. He is sent out as a spy, while his mother is held hostage to ensure his compliance.

When Iwan and Ashael meet and she invites him to stay in Oak Cam, neither of them realise that she is the one the Zanthar seek. The fate of KalaDene and all of its people rests on Ashael’s shoulders.

What I recently finished reading

I really liked Siege and Storm. I’d agree that it wasn’t as good as the first book, but I still flew through it and I love the Russian mythology weaving into it. I’m excited to read the final title in the series now and see how everything’s going to play out.

Hunted across the True Sea, haunted by the lives she took on the Fold, Alina must try to make a life with Mal in an unfamiliar land. She finds starting new is not easy while keeping her identity as the Sun Summoner a secret. She can’t outrun her past or her destiny for long.

The Darkling has emerged from the Shadow Fold with a terrifying new power and a dangerous plan that will test the very boundaries of the natural world. With the help of a notorious privateer, Alina returns to the country she abandoned, determined to fight the forces gathering against Ravka. But as her power grows, Alina slips deeper into the Darkling’s game of forbidden magic, and farther away from Mal. Somehow, she will have to choose between her country, her power, and the love she always thought would guide her–or risk losing everything to the oncoming storm.

What I think I’ll read next 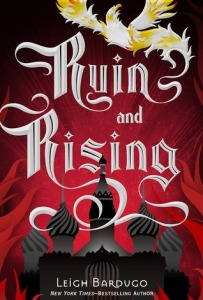 This is still my next read… It’s taken me a while to get through my ARC since I read two books parallel to each other for a while, but it won’t be long now! I’m hoping to start it on Friday, maybe even Thursday. I’m really looking forward to it now!

The Darkling rules Ravka from his shadow throne.

Now the nation’s fate rests with a broken Sun Summoner, a disgraced tracker, and the shattered remnants of a once-great magical army.

Deep in an ancient network of tunnels and caverns, a weakened Alina must submit to the dubious protection of the Apparat and the zealots who worship her as a Saint. Yet her plans lie elsewhere, with the hunt for the elusive firebird and the hope that an outlaw prince still survives.

Alina will have to forge new alliances and put aside old rivalries as she and Mal race to find the last of Morozova’s amplifiers. But as she begins to unravel the Darkling’s secrets, she reveals a past that will forever alter her understanding of the bond they share and the power she wields. The firebird is the one thing that stands between Ravka and destruction—and claiming it could cost Alina the very future she’s fighting for.

Have you read any of these and would like to chat about it? I look forward to hearing from you if you do – just leave a comment below and we can get this book club started!

Sarina Langer is an epic fantasy author, fiction editor, and self-publishing mentor. Her debut novel, Rise of the Sparrows, was released in late May 2016. Its conclusion, Blood of the Dragon, is currently with her critique partners as she’s working on Books 2 and 3 in the Blood Wisp novella trilogy. She’s as obsessed with books and stationery now as she was as a child, when she drowned her box of colour pencils in water so they wouldn’t die and scribbled her first stories on corridor walls. (‘A first sign of things to come’, according to her mother. ‘Normal toddler behaviour’, according to Sarina.) In her free time she reads whatever her tbr jar coughs up next, plays video games, and researches the darker side of humanity and the end of the universe. She has a weakness for books on writing and pretty words. (Specificity, anyone? Or perhaps nebulous?) Sarina lives with her partner and daughter (read: their cat) in the south of England.

WARDENS OF ARCHOS is now being edited.

Not sure where to start? Here are some ideas:

There was an error retrieving images from Instagram. An attempt will be remade in a few minutes.

Grab a hot drink, pull up a chair and be my reading buddy! :)

I LOVE your feedback, but…

... please keep it civil. There's no need to be rude or disrespectful towards others. Hurtful comments - towards me or somebody else - will be removed.

I look forward to hearing from you, so feel free to say hello any time :)